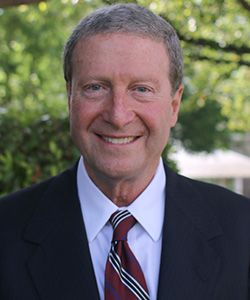 As we closed out the 2018-2019 school year, and the end of my tenure as Board Chair approached, I began to reflect upon what a privilege it was to have been able to serve as Chair of the Board of Trustees during our School’s first leadership transition in 18 years. My time as Chair gave me the ability to work with Greenhill’s fourth Head of School, Scott Griggs, during his last year, and to appreciate firsthand the deep level of care, concern, and commitment Scott always held for Greenhill. It was also a gift to be able to work with the members of Greenhill’s Head of School Search Committee, as we interviewed candidates for our next Head of School. We spoke with many extraordinary individuals, but at the end of our search there was no doubt that our choice for the next Head of School would be Lee Hark. Getting the chance to participate in his selection, and then to be able to work closely with Lee during his first year, gave me the opportunity to watch firsthand as our fifth Head of School actively continued the long tradition of excellence established by his predecessors. Lee and his family were quickly embraced by our entire community, which just as readily developed an appreciation for the many actions Lee took to make Greenhill even better. Lee and his leadership team have already begun to evaluate a broad array of additional changes and improvements to enhance the Greenhill experience for everyone. Lee has likewise begun working with Greenhill’s Strategic Planning Committee Chair, Albertina Cisneros, and the members of that committee, to develop a strategic plan that will identify and prioritize key initiatives for expanding Greenhill’s preeminence even further. I also recently had the distinct pleasure of welcoming Holland Gary ’93 as the new Chair of the Board of Trustees. Holland has served with true distinction as a member of the Board of Trustees for the past eight years and has taken on broad responsibilities during that time, including his roles as Finance Chair and Treasurer, and Secretary and Assistant Chair of the Board. He and his wife, Leila, are the proud parents of Greenhill sixth-grader James and first-grader Julia. Our school is extremely well-positioned for the future with Holland and Lee at the helm. On behalf of the entire Board of Trustees, I want to thank each of you for your ongoing support of Greenhill. Your continuing generosity elevates the experience of each of our students and enhances what our dedicated faculty strive to accomplish in the classroom every day. It is certainly an exciting time to be a member of the Greenhill community and our exceptional School. Best regards, Bruce Sostek
Chair, Board of Trustees